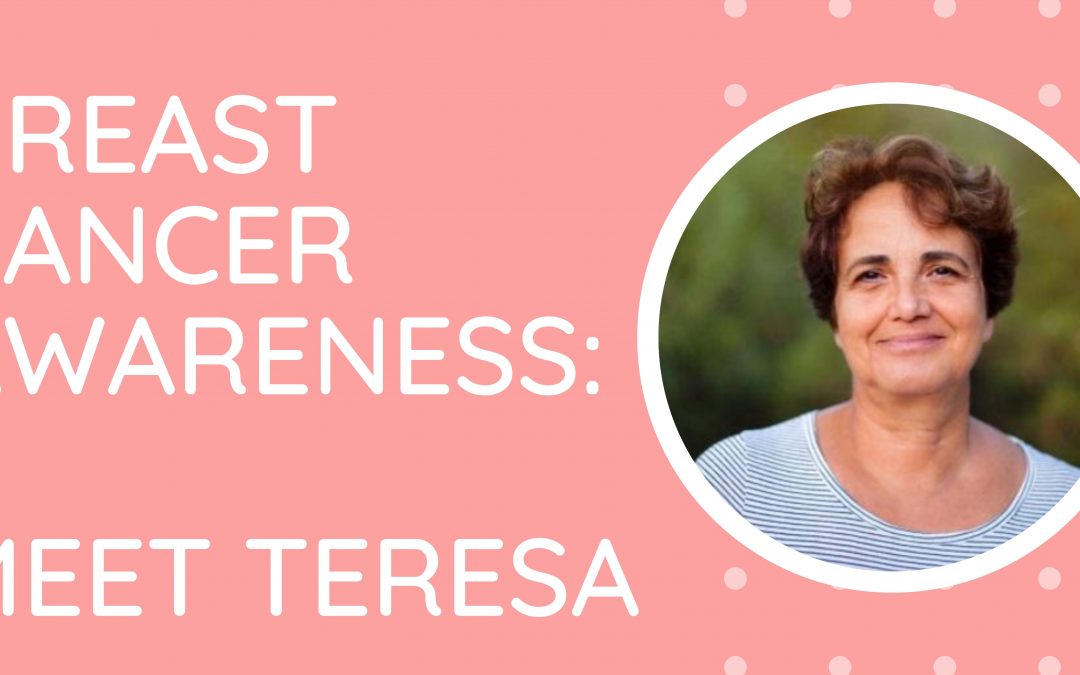 We all know someone who is a breast cancer survivor.

Meet my friend Teresa who not only is a breast cancer survivor, but was an injured worker at the same time she was in treatment for breast cancer!

Teresa and I sat down for an interview so that she can share her story.  The following is a transcript of our interview.

Bobbi: Hi Teresa. Can you tell us how this all got started?

Teresa: When I got injured, I was a supervisor for the Park Service in water treatment. A few years ago, we were shorthanded so I was helping out in the field. I was lifting a manhole cover and hurt my back. I thought after a few days of rest, it would be better, but a week later, I could barely move, so went to my doctor.

Bobbi: What did your doctor do?

Teresa: She sent me to a physical therapist and gave me some medication to help reduce the inflammation in my back. I even tried massage therapy. It felt good, but then the next day, my back still hurt. After almost three months of back pain, she sent me to a specialist because she wondered if I was developing chronic pain and thought they might have a program that could help me.

Bobbi: What type of specialist did she send you to?

Teresa: She sent me to a Physical Medicine Rehabilitation’s doctor at Pacific Rehabilitation Centers. I met with the doctor, a psychologist and a vocational counselor. It was a three hour evaluation to determine if I could benefit from their program. While I was with the Doctor, I showed her a bump on the side of my breast and asked her if it was from my back injury. She said no and suggested I get it looked at.

Bobbi: WOW! That must have been really scary.

Teresa: They were all really nice but I wondered if they thought I was crazy because I saw a psychologist. The psychologist said no, but he could teach me some ways to sleep better and to not be so anxious and afraid. The Vocational Counselor understood that I just wanted to go back to work and said he could help me get to work.

The “bump” turned out to be a lump! I went back to my doctor to have her look at it and she sent me for a mammogram. They said it looked “suspicious” and scheduled me for a biopsy the next week.

The biopsy showed that I have Stage 1B and they removed the lump and do radiation. This is all happening 3 weeks before I am supposed to start the pain program at Pacific Rehab! I didn’t want to have cancer and I really wanted to get back to work!

Bobbi: So what came next?

Teresa: I talked to a lot of people and decided that since I didn’t have to have chemotherapy and the Pacific program was three weeks long, I could schedule by radiation after 3pm and do both. So, I started the Return to Work Pain program on day three of my radiation treatment – Radiation would be just like the Pacific program, 5 days a week.. I scheduled my treatment for late afternoon and had a 90 minute rest between the pain program and radiation therapy.

Bobbi: I can’t imagine! Two things at once and both sound difficult. Did the radiation make you sick?

Teresa: I would say the first 7-10 days were physically hard in the pain program partly because I was out of shape from not working, but by the second week, I started to do better. Pacific was great and I took a nap during the lunch break.. My radiation wasn’t until 5pm, so I went home and rested.

Bobbi: What would you say was the best part of the Pacific program?

Teresa: I really enjoyed the classes and I learned SO MUCH about pain – what’s good pain, what to watch out for, the relationship between pain and my brain, how to sleep better, what kind of foods to eat, ways to reduce tension and anxiety.

I also liked getting to know the other people in the program and realized I wasn’t the only person with chronic pain. All of the staff were so supportive and were rooting for me.

Bobbi: How was your pain after you finished the program?

Teresa: My pain was improved and I learned so much about how to regulate my life to decrease the pain. I am a pretty anxious person and I learned how to control my anxiety. I think that helped with my cancer treatment too.

I think between the Pain program and my breast cancer diagnosis, I figured out what I really wanted in my life. I realized I can do anything even if it’s really hard, I can dig down deep and find the strength to get through difficult things.

Bobbi: Did you get back to work?

Teresa: I was able to return back to work 3 months after I finished the pain program and two months of finishing my breast cancer treatment.
Even though I went back to work, I decided I wanted something more, so I took classes and became a water resource manager for the Park Service.

Bobbi: Looking back on all of this, do you have any “words of wisdom” for people reading this article?

Teresa: I would suggest four things:
1. If you are a woman, do self-breast exams and get a mammogram every year. If you are a man, check for lumps and bumps in your private parts.
2. Learn to lift heavy things correctly and get help if you need it. You don’t have to be Super Woman or Super Man.
3. Believe in yourself – as hard as something may be, believe that you can do it and find someone to walk beside you for support.
4. Cancer changes how you look at life. Don’t settle for less than you can be.

I could have given up – but the people at Pacific Rehab and my friends and family gave me the strength to keep moving.

Get in touch with us to learn more about what Pacific Rehabilitation Centers can do for you.